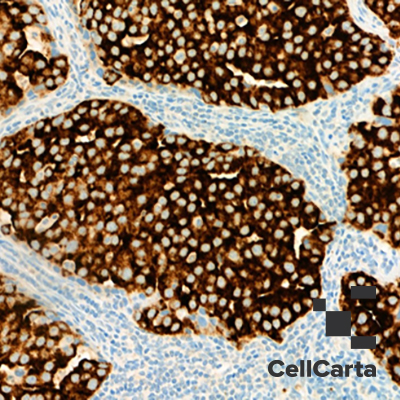 ALK is a transmembrane glycoprotein with tyrosine kinase activity that plays a key role in controlling cell proliferation. The protein is considered a key oncogenic driver in NSCLC where rearrangements of the ALK locus are observed in about 5% of the patients. In-frame rearrangements with the known fusion partners place the ALK kinase domain under the control of a different gene promoter. This fusion results in a chimeric protein (like EML4-ALK) with constitutive tyrosine kinase activity. ALK IHC staining can be used as a first screening method for determination of patients with ALK positive NSCLC tumors. Thereafter ALK positivity is confirmed by ALK FISH. Patients with ALK positive NSCLC tumors can benefit from treatment with the small molecular kinase inhibitor, XALKORI®.