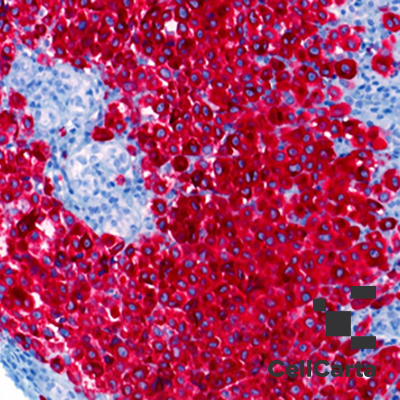 Melanoma Triple Cocktail (HMB45+A103+T311) is a cocktail of anti-Melanosome (HMB45), anti-MART-1/melan A (A103), and anti-Tyrosinase (T311) mouse monoclonal antibodies. MART-1/melan A, melanosome, and tyrosinase are melanocyte markers that are expressed in the majority of malignant melanocytic lesions. Each of the individual antibodies in the cocktail demonstrates cytoplasmic staining and thus will overlay on tissues where two or more antibodies stain, allowing for potential of increased sensitivity. A cocktail of antibodies directed against MART-1/melan A, melanosome, and tyrosinase has been reported to provide advantages in sensitivity, over the use of the individual antibodies alone, in the detection of melanoma while still maintaining good specificity. The melanoma triple IHC assay is used to identify tumor nests in melanoma tissue.